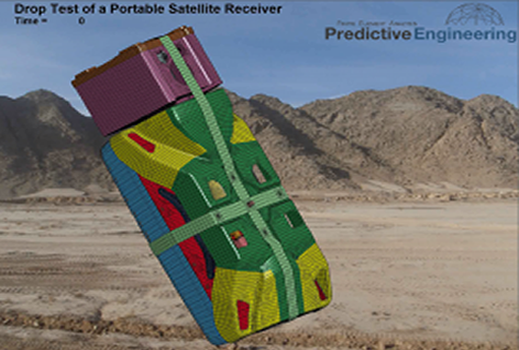 An ultra light-weight carbon and Kevlar fiber composite electronic device was drop tested through a range of 26 positions (MIL-STD 810e).  The shell of the unit was a blend of carbon and Kevlar layers for increased impact resistance.  The finite element model was used to document experimental drop test failures and then to implement solutions.  The modeling results were reviewed by a team of external experts and accepted for production.

.Introduction:  An advanced electronic device with a composite protective shell of carbon fiber, kevlar and standard fiberglass was drop tested using LS-DYNA.  The drop test procedure followed that as given by a MIL-SPEC 810e sequence of 26 drop positions that theoretically envelopes all possible drop scenarios.

The LS-DYNA model was constructed using plate and hex elements for all major structural components.  The carbon fiber and glass fiber (FRP) composite structures were modeled using LS-DYNA’s composite elements via *PART_COMPOSITE.  Failure predictions were made within major structural sections by an assessment of plastic damage. The construction of the FE model was based on numerous simplifications that are not always the easiest to justify in strict analytical terms but are based on proven past techniques that have been shown to generate acceptable results.

The major structural components of the system were its carbon/Kevlar shell components along with the glass-fiber (FRP) antenna base.  The antenna was connected to its azimuth drive via a carbon fiber tube.  The azimuth drive motor housing was made of die-cast magnesium and was idealized using a combination of brick and plate elements to capture its variable thickness geometry.  The drive motor and other significant weight components were model using mass elements.

Drop-test results from the model were shown to accurately predict two of the three noted failures in the device.  The third failure not noted in the FEA model was vigorously debated in several meetings with the client (the manufacturer) and their end client (government).  Predictive suggested that a metallurgical analysis be performed on the die-cast magnesium azimuth drive housing at the base of the antenna.  Results from this analysis showed massive porosity that aligned perfectly with the cracks observed from the drop-test.  Given this observation, the client concluded that the FEA model had accurately predicted all failures and lend to an improved process specification by its null result finding.

Figure 1: Finite element analysis model was built from CAD geometry provided by the client and then idealized into geometric sheets and base solids for plate and brick meshing

Figure 2: The composite structures were meshed with plate elements and their layups defined within Femap using its Layup Editor.  These layups were translated directly out to LS-DYNA via *PART_COMPOSTE cards

Figure 3: The meshed Femap model was checked for its explicit time step and the mesh was carefully sized to ensure that mass scaling was minimal.

Given the extensive drop-test requirements of MIL-STD 810e, the FEA model was built with highly structured plate and hex meshes.  The time step was monitored during every meshing operation with the objective to maintain an explicit time step of approximately 250 nanoseconds or given the carbon fiber composite (FRP) wave speed of approximately 8,000 m/s, the element size could be as small as 2 mm or 0.08”.  This facilitated a detailed mesh in regions of interest.

Figure 4: The azimuth drive housing was particularly complex due it the die-cast magnesium base attached to the carbon-kevlar composite base structures.

The base of the antenna used reinforced carbon / Kevlar layups for impact resistance.  During testing small cracks were noted at the corners and matched high-stresses but not failure within the LS-DYNA FEA simulation of the drop-test.  The azimuth motor mount used a *CONSTRAINED_NODAL_RIGID_BODY to attach the motor mass onto the frame of the housing.

Figure 5: The azimuth drive housing was idealized using a combination of brick elements where the carbon fiber mast tube was bolted onto the housing and then a structured plate mesh for the main drive housing and its motor mount frame

Figure 6: A standard MIL-STD 810e drop-test sequence is shown.  The LS-DYNA FEA simulation was accelerated to provide a more dramatic drop-test than that would exist from the specified four foot drop height onto plywood

The main suite of drop-tests involved eight separate simulations to envelope the 26 required drop-test positions per MIL-STD 810e. Given the optimized model, run times were under 30 minutes.  After model validation against test, the design was optimized to eliminate failures and tested again.  Experimental results correlated to the model and the device is in production.