I’m doing more and more implicit work with LS-DYNA and would like to share some of my observations on its improvement over the last couple of years. You might be surprised how far Mortar Contact and linear dynamics (e.g., PSD and general NVH) have come. This article provides a quick little overview of what is happening with LS-DYNA implicit, some tips and tricks we have learned along the way, and resources that are available to sharpen up your skill set.

Our work at Predictive Engineering is typically the straight-up “classic” linear analysis. Although pretty ho-hum in comparison to a massive nonlinear dynamic crash model, it is still challenging enough to keep us on our toes to get validated results. The big change we have seen over the years is that even our vanilla FEA models are pushing the boundaries with nonlinear contact or mild forms of plasticity or elastomeric materials. Using a standard implicit code is always possible but if you build for LS-DYNA from the very beginning, a world of analysis options become available and if the setup cost is the same, why not opt for more options?

Let’s do the simple stuff first; that is, LS-DYNA can match up linear, elastic stresses with the best of them. Figure 1 contours the von Mises on a quarter-symmetry, uniformly loaded plate with a hole. The results between a standard Nastran code and LS-DYNA are identical. If you build the model using hexs or tets you’ll likewise get identical results. For the plate model, I’m using ELFORM=20 (CQUAD4-like element) with *DATABASE_EXTENT_BINARY with maxint < 0 and then with the standard implicit cards. If you would like the models, just send me an email and I’ll send you the commented decks. To get the stresses to match up, one uses Extrapolate > 0 within the latest version of LSPP. Just to keep you on your toes, the LSTC team also has a new stress extrapolation routine under *DATABASE_RECOVER_NODE.

Okay, But Can It Solve Real Nonlinear Problems?

And the answer is “sometimes.” Of course there are limitations but that is life in the implicit world. Let’s talk about reality. It is all about where you are going with the analysis. For example, in a turbine burst analysis, one can lock down large parts of the model with *BOUNDARY_SPC _BIRTH_DEATH and likewise turn off or on contacts (BT or DT options), implicitly spin up the blade and then switch over to explicit for the blade containment analysis. A more common usage is just to run the model in implicit model and then request intermittent eigenvalue value analyzes to verify that the model is behaving correctly, or just to capture its vibration response while parts are contacting and plastically deforming.

In running LS-DYNA implicit, we set modest expectations and try to get a solution. If things work well, we then crank up the nonlinearity. I strive to build small pilot models of regions that have multi-body contact or other nonlinearities and then tune the analysis to run with this simple model. Once I have the pilot model figured out, the full-scale model is not as daunting and I’m not spinning my wheels as much waiting for a solution.

The most interesting recent development is that for Mortar Contact. We have had really good success with it on a variety of models. The two models shown in Figure 2 both solved in minutes. The jet engine stand had lots of contact with material plasticity and elastomeric shock mounts. The client’s specification also required a normal modes assessment under load and this was simply incorporated into the run using *CONTROL_IMPLICIT_EIGENVALUE with –NEIG (to reference an eigenvalue vs time curve). However, the eigenvalue extraction has been around for some time. What I think is particularly noteworthy is the beam-on-beam Mortar Contact model. This little model had around 15,000 beams elements and the complete torsion analysis with failure took around 10 minutes running on four CPU-cores (MPP).

Besides these two examples, we have been working on a large composite structure with *MAT_54 as the material model and the workhorse *MAT_24 for the metallic components (with IACC=1). The structure has a large metallic joint along with several internal contacting components. The model ended up having 22 beam-on-beam, surface-on-surface and single-surface mortar contacts. For economy, several parts were just tied (_CONSTRAINED_OFFSET). Bolts were pre-loaded and composite failure was active with several of the load cases causing large sections of the composite shell to fail. This model is one of our crown-jewels of implicit since the client’s specification had a dozen static (implicit) load cases along with drop, roll-over and rail-impact dynamic (explicit) load cases. The final model has a tad over 100,000 nodes and runs in about 15 minutes on a standard PC Workstation with MPP LS-DYNA. 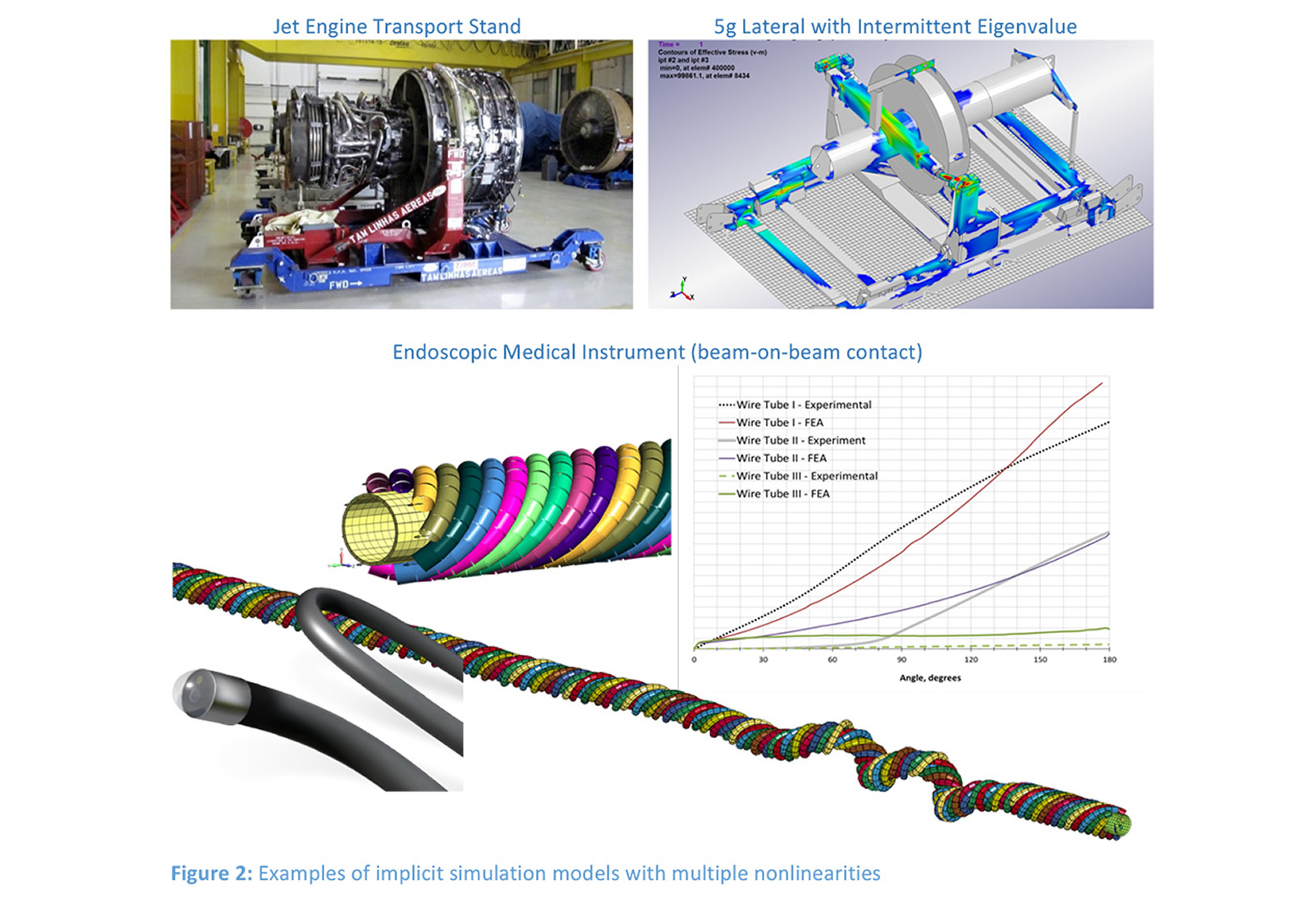 How Can I Learn More About LS-DYNA Implicit?

I know this sounds a bit funny but Google “implicit LS-DYNA” and you’ll see a bunch of really great articles. My short list is the DYNAmore guidelines, an earlier publication of theirs titled “Non-linear Analysis Using LS-DYNA Implicit”, followed by a slow and thoughtful read of the latest Keyword Manual. Another nice reference is the work done by Roger Grimes of LSTC (one can look within DYNAlook or Google for Roger’s work).

There are no shortcuts to learning except to build from a base of understanding via small pilot models and then test your assumptions one-by-one until you have enough confidence to “jump off the cliff” toward building a more complex model.

Although I like to say that one can independently learn, the reality is that without the gracious and outstanding help from the LSTC technical team, I would have spent double the time trying to get these models to run. In paying forward their help, if you would like to have any of the Keyword decks (albeit minus the proprietary stuff), just send me an email.